The Life and Death Knot of Transgender Psychoanalysis 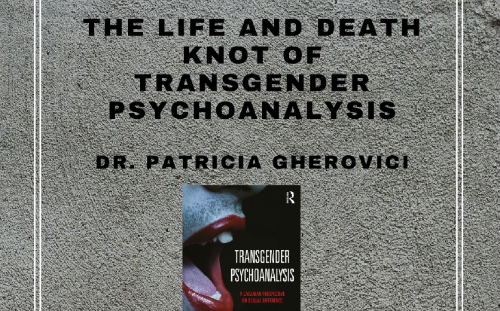 “I had no choice. I would be dead if I hadn’t transitioned—I would have killed myself.” Drawing on her clinical experience as a psychoanalyst working with gender-variant analysands, Gherovici argues that those compelled to change gender often do it because they are facing issues of life and death. What is at stake is less gender fluidity than finding a way of being. Challenging the pathologization of transgenderism historically enforced by psychoanalysis, the presenter makes use of Lacan’s notion of the sinthome to propose an embodied ethics of desire capable of fundamentally rethinking gender and sexuality.

Bio: Dr. Patricia Gherovici is a psychoanalyst, analytic supervisor, and recipient of the 2020 Sigourney Award for her clinical and scholarly work with Latinx and gender variant communities.She is co-founder and director of the Philadelphia Lacan Group and Associate Faculty, Psychoanalytic Studies Minor, University of Pennsylvania (PSYS), Honorary Member at IPTAR, and Founding Member of Das Unbehagen. Her single-authored books include The Puerto Rican Syndrome (Other Press: 2003) winner of the Gradiva Award and the Boyer Prize,  Please Select Your Gender: From the Invention of Hysteria to the Democratizing of Transgenderism (Routledge: 2010) and Transgender Psychoanalysis: A Lacanian Perspective on Sexual Difference  (Routledge: 2017). She edited two volumes with Manya Steinkoler: Lacan On Madness: Madness Yes You Can’t ( Routledge: 2015) and Lacan, Psychoanalysis and Comedy (Cambridge University Press: 2016).  Most recently, she published with Chris Christian Psychoanalysis in the Barrios: Race, Class, and the Unconscious  (Winner of the Gradiva Award for best edited collection and the American Board and Academy of Psychoanalysis Book Prize; Routledge: 2019)