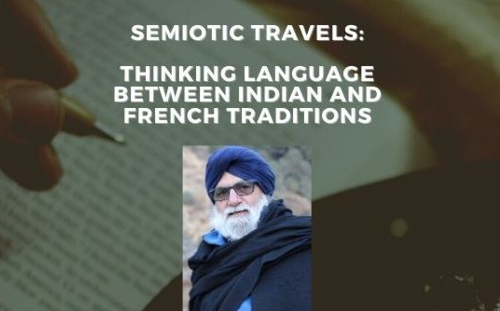 The talk will be a conversation between Gill and IITGN faculty Nishaant Choksi and Arka Chattopadhyay discussing Gill’s unique theory of ‘signification’ in language, cognition, and philosophy, which draws from his deep, decades long “semiotic travels” between India and France and between Indian and French philosophical traditions.  It will also discuss how his ideas may challenge the dominant theories currently in vogue in academic discourse.

Professor Harjeet Singh Gill is one of the most famous names in the field of semiotics in India.  He spent his formative academic years during the 1960s at the prestigious Centre National de la Recherche Scientifique in Paris and interacted and learned from some of the greatest academic luminaries of the century such as Jean Paul Sartre, Michel Foucault, Claude Levi-Strauss, Jacques Lacan and others.  After returning to India, Gill worked for several years at Patiala University in Punjab making it a national centre for the study of semiotics and later moved to Jawaharlal Nehru University in Delhi.  Gill’s lifelong interests have been to foreground heterodox and dialectical traditions in Indian and European thought and place them in conversation with each other, with a particular focus on the works of the 12th century French scholar Abelard and Indian Buddhist scholars such as Dignaga and Dharmakirti.  His other passion has been to translate texts of the Sikh gurus and Punjabi folk traditions.  He has written several books and articles on these subjects, many of which can be found here: https://jnu.academia.edu/HarjeetSinghGill
Ical Export